This post originally appeared as an insight for Outsell’s customers. Republished with permission.
Will pay-TV companies continue to try to control access to content, or will they decide that their core business is something simpler, and possibly more profitable? Two keynote speakers at NYC Television Week differ.
Important Details
At NYC Television Week in New York on Monday, two keynote speakers presented entirely different visions of the future of television.
http://nyctelevisionweek.com
David Stern, NBA commissioner and attorney, told Multichannel News Editor-in-Chief Mark Robichaux that “TV Everywhere is going to be an accepted part of our video and television infrastructure“. Stern’s vision is that teams and leagues will contract with channels, which will work with pay-TV providers to charge consumers to watch games on the internet.
That same day, analyst Craig Moffett told his audience, “Imagine a world where content was purchased directly by the consumer. … The business that [the cable operator is] in is not buying and selling content, the business that I’m in is delivering content.”
These vision are mutually exclusive. In the short term, we can expect and emphasis on TV Everywhere from pay-TV providers. In the longer term, it’s far from clear that this is the right path.
Implications
Because of their desire to preserve their bundle, pay-TV operators take on many businesses and expenses that are unrelated to the one business they do that no on else can do: operate the pipe that connects consumers’ homes to the internet. These businesses include development, distribution, and maintenance of devices in the home, such as cable boxes, cable cards, and DVR’s; operation of vast fleets of service personnel and vehicles to maintain these devices and the connection to the video services; provision of cloud services, such as video on demand, virtual DVR’s and authentication services for TV everywhere; operation of the back-end services for delivering linear video the home; negotiation with cable channels, broadcasters, producers, and others for rights to video content; and running vast sales and customer service bureaucracies devoted to video channels and services.
As one point, not that long ago, there was genuine synergy between all these elements. It was necessary to bundle these services to create a product that consumers could understand, afford, and use. They became something that was more valuable than the sum of its parts: a simple linear television service that could be operated with a simple remote by a simple person.
But now the bundle is more complex. It is almost certainly hiding inefficient businesses that are cross-subsidized by the more-profitable core business. Meanwhile, the internet continues to innovate — from billion-dollar service providers, all the way down to the devices consumers hold in their hands. And, finally, content creators (including sports teams) may decide to take more control of their distribution.
The pay-TV industry will be unable to keep pace with change in the open market, and therefore its strategy must be to slow the pace of change.
Also, it’s also not clear how to transition from being a pay-TV provider to being a pure-play internet service provider. It’s also not clear what the regulatory implications of such a move would be.
Cable companies could find a profitable equilibrium at the end of either path. Consumers may finally come to love TV Everywhere in 2014.
But in the long run, cable companies may decide to be just cable companies.

I’ve accepted a job as VP & Lead Analyst in Outsell’s Marketing, Media & Analytics practice.
Outsell is a market research firm focusing on media and information. I’ve done several projects with with Outsell as a consultant in the past, and I’m looking forward to working with them full time. I’m taking a week off after leaving Dow Jones and will start on Monday, June 3.
I’ll miss my friends and colleagues at Dow Jones, where I’ve been working with their largest Factiva clients.
I’ll post more details in the usual places as I set my research agenda for the coming year.

Ethan Zuckerman proposes a new measurement of attention – the Kardashian:

Of course, the value of a Kardashian changes, depending on coverage volume. Eventually, we’ll enter into a period of Kardashian hyperinflation, and we’ll all be overexposed. 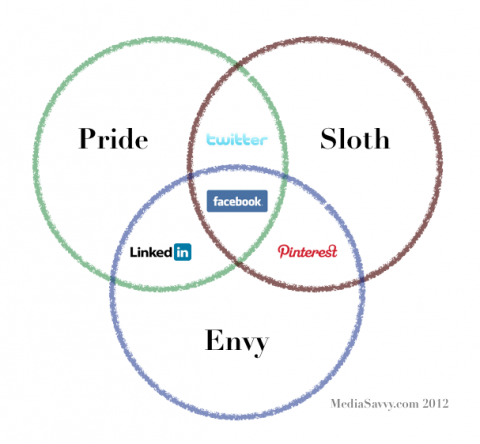 This post originally appeared on Dow Jones’ blog The Conversational Corporation.
In the summer of 2011, Netflix was the future of video and its stock was at an all-time high. Within a quarter, the company lost two-thirds of its market value and its strategy was a shambles.
Between July and October 2011, the company unbundled its DVD and streaming services, increased its prices for the second time in a year,  announced  that it expected to lose a million customers and that it would spin off its DVD service under the brand “Qwikster”, and then canceled Qwikster less than a month later.
Netflix’s stock price has not recovered.
Netflix was trying to mitigate some powerful strategic threats in the summer of 2011, but the company lost control of its message.
I charted Netflix’s Dow Jones Insight Media Index (IMI) for 380,000 news stories since last July. Since October, Netflix’s IMI has returned to its summer  2011 levels, but the company’s stock price is stuck in the doldrums.
The Netflix debacle is more of a strategic than a communications fable, but there are some clear lessons for marketers:
• Think ahead. By delaying the inevitable unbundling until the last minute, Netflix maximized the pain for their customers and themselves.
• Keep it simple. Netflix was founded on a principle of simplicity, but Qwikster was just baffling.
• Own your name. Someone already owned @Qwikster on Twitter. This expensive error signaled a lack of preparation to the markets.
• Think twice before doubling down. Netflix followed its unpopular unbundling with a baffling spinoff. 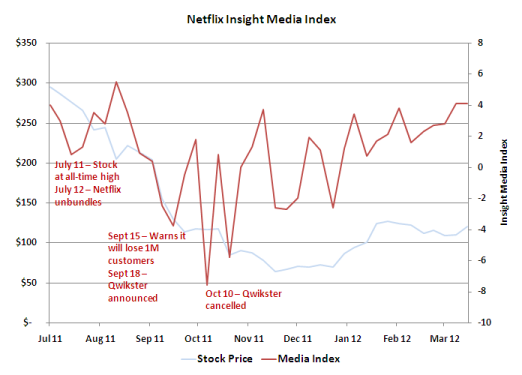 Although Chrome’s the best browser for Windows, I’ve favored Safari over Chrome on the Mac until a couple of weeks ago. Safari looks better and and is easier to use, in my opinion. But Chrome now works better.
I thought I was the only person experiencing the spinning beach ball when leaving lots of tabs and web apps open. I switched to Chrome on the Mac a couple of weeks ago, and there’s no question it performs far better for this purpose.
Tim Bray [via Gruber] notes the same solution:

In recent releases, Safari has been re-architected, with some of the work farmed out to a thing called “WebProcess”. This doesn’t seem to be working out that well. Specifically, I note that:
[…]
To be fair, part of the problem is the proliferation of Web apps that are extremely heavyweight in terms of the amount of JavaScript code sloshing around in the background. A notable example is Google+. Even sprucing up this blog’s typography has involved quite a bit of industrial-strength JavaScript. But that just seems to be what a modern Web browser has to suck it up and deal with.

Patch traffic and page growth appears to have flattened out. I’ve been following the rise of Patch traffic on Quantcast for about a year, and have been impressed with their steady linear growth. Until now.
Even accounting for summer doldrums, this looks like they’ve peaked.

Meanwhile, Huffington Post, a more mature AOL news property, grew at pretty healthy rate over of the summer, even ignoring the fact that Quantcast’s chart doesn’t start at zero.

I have mixed feelings about Patch. It is better than nothing — and nothing is what many communities were getting before Patch. But it doesn’t exactly break my heart to see this corporate competitor to hundreds of locally-owned community news sites hit its peak.

This week, Amazon.com dumped its California affiliates (including me) because it was unwilling to collect sales tax in the state.
I’d say it’s time for Amazon to grow up and be a good citizen, but that’s years overdue. Danny Sullivan has an excellent analysis of the issues, both economic and ethical.
There’s no question that Amazon is using what amounts to a loophole to gain unfair advantage over local retailers (not all of whom reside in big boxes).
I’ve been an Amazon affiliate for years, but never got around to posting the links on my community news site, mainly because I live in a small town, and I support my local retailers. I also buy a ton of stuff from Amazon, but I didn’t want to actively support the gutting of my downtown. To say nothing of the gutting of social services, state parks, schools, and quality of life resulting from the state’s tax drought.
I have no sympathy for all those affiliates chasing “passive” income. We’re seeing plenty of pro-Amazon of comments from those creepy libertarian nihilists. I do have a lot of sympathy for those affiliates who work hard to provide their readers with real value and are trying to make a go of it online. But they should be looking to Amazon for relief, not Sacramento.

I just saw a new attack on my member whitelist, in what may be a new wave in comment spam designed to attack sites that use member whitelists to control posting.
On Coastsider, my community news site, all commenters must verified before their comments are released and their accounts are taken off pre-moderation. This is relatively easy for me, since my service area is small and I ask new registrants for the name of the community they live in. That’s more work to fake than most comment spammers have time for. They don’t even try, usually using nonexistent places, such as “farm road” and “western trench”.
I verify most new members if they post a reasonable comment on a entry. Today I had a registration from a new user who left a comment that could have only been left by an informed local:

Tough to imagine the county of the present doing anything right in this part of Fitzgerald, where they can’t even locate the California Coastal Trail where it has already served well on an ad hoc basis for the last decade and a half.

No wonder: He lifted that comment from one of the informed locals who had already left a comment on that story.
I wouldn’t have figured that out if “Tom Smith” hadn’t also left a comment in Chinese on another story, and used the email address “[email protected]” and the real — but unlocal — community of “UK”.
I doubt SEOMimic is going to be as careless the next time it shows up on my site — or yours.
I get plenty of comment spammers on Coastsider, but this is the first attack of this nature I’ve seen. My guess is I’ll be seeing more — and more sophisticated — SEOMimic attacks in the future.